Over 20 villages surround Mt. Rinjani and there are many routes up the mountain, but the main access is from Senaru in the north and Sembalun Lawang to the east.

Gunung Rinjani national park lies within the major transition zone (Wallace) where the flora and fauna of south East Asia makes a dramatic transition into that which is typical of Australia. The park has a rich variety of plants and animals, although they can be hard to spot due to the terrain and rainforest cover.

Sometimes seen early in the morning is the morning is the rare black Ebony leaf monkey, know locally as lutung. The long tailed gray macaque of kera is common in Lombok and order males are seen on the crater rim. Rusa deer are forest dwellers and are occasionally seen a long the Rinjani trek train.

The smaller barking deer or kijang has an alarm call with a distinct dog - like bark. Look for the disturbed ground where the wild pig or babi hutan has been foraging. Also found in the forest is the leopard cat or bodok alas, palm civet or ujat and porcupine or landak.

A variety of colorful birds live in the forest of the park. Perhaps the best – know icon of the park is the crested cockatoo that is not found any further west of Lombok. Many of the forest-dwelling animals, insects, birds, civets, and monkeys owe their survival to the wild fig tree or beringin as a provider of food and shelter.

The following stories are a selection taken from a booklet for village guides containing a collection of traditional stories that have been related for generations by the people of Dusun Senaru.

At the second resting place (Camp II) is a stone which is called Batu Penyesalan. This marks the place where the trekkers feels a conflict about whether to continue or to turn back because we still have as far to go to our destination as we have already walked.

Usually it takes about two hours to walk here from Bunut Ngengkang.

One of the three famous caves (Goa Susu, Goa Payung, dan Goa Manik), Susu Cave is a good place for self reflection and is often used as a place to meditate. The people with unclean and envious mind will have difficulty entering Susu cave which has a narrow entrance, but people with noble and pure mind will easily enter the cave.
Inside the cave water drips from the tip of a stone which looks like a nipple, so people say the water in Goa Susu tastes different. Inside Goa Susu is hot and there is a lot of smoke which looks like cooking steam so people call this Mengukus (hot house) and sometimes people call it Rontgen (X-Ray). 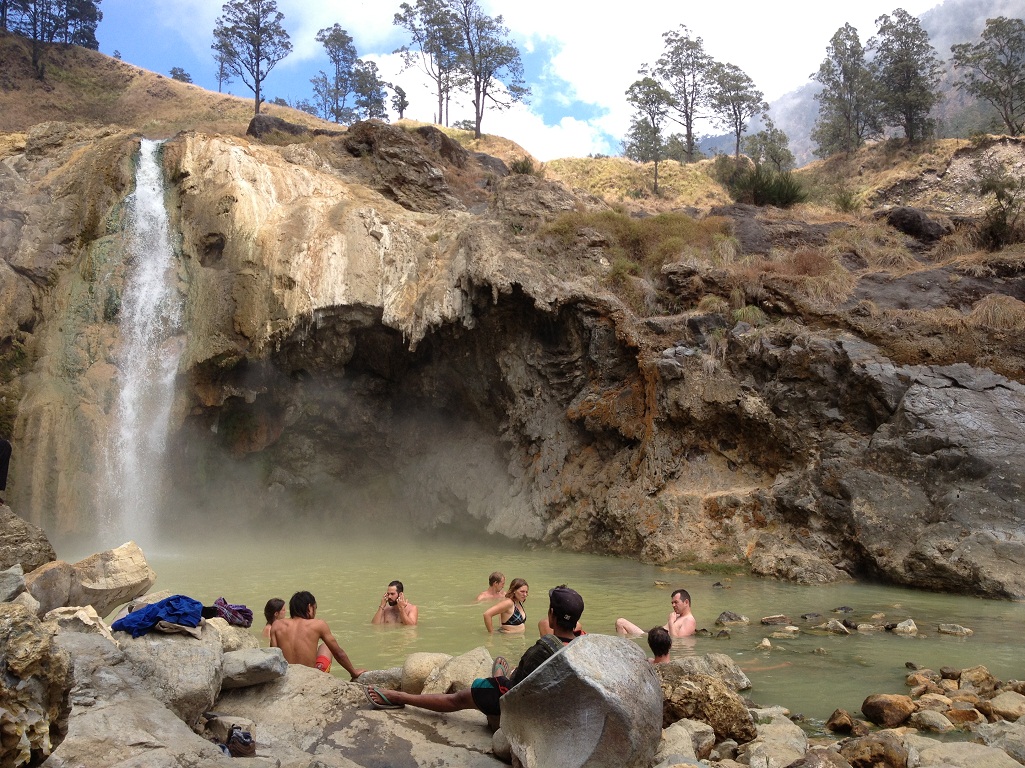 Aiq Kalak means hot water and it is used to cure various deseases. One of the hot springs is named Pangkereman Jembangan which is meant a place for dipping. The water which spurts out of the spring is very hot. Weapons such as keris, swords, big knives, and lances are dipped in the spring to test their magic power. If the weapon become sticky it means that the weapon is bad and has no magical power. However if the weapon remain unchanged it means that the weapon has supernatural power and the power and the strength will be increased.
People also use the hot spring to make medicine from coconut cream. After dipping a bottle of coconut cream in the hot spring if the liquid becomes clear oily it can be used as medicinal oil. Then the medicinal oil is used for good things and is called Siu Satus Tunggal or in Bayan language Siu Satunggal which means that it can be used to cure a thousand kinds of desease.

Segara Anak Lake is so wide it appears like the sea with its blue water. The name Segara Anak means child of the sea.

Segara Anak Lake holds various mysteries and invisible power.
People feel content to stay a long time in this place because of the large community of mysterious spirits which live arround the lake. The local people believe that if the lake looks wide when seen at a distance it is a sign they will live to an old age; or if the lake seems narrow it is a sign of a short age. So in order not to be pessimistic, people quickly purify themselves by lifting up their spirits and calm soul and look at the lake contentedly.
In the area of the lake it is forbidden to have sexual intercourse, to complain or say dirty things. We must be patient when facing problems.

This plant grows along the route to Mt. Rinjani. It has thorns like the rose and the fruit is red like strawberry. It has a sweet and slightly sour taste and is good to eat when trekkers are hungry and thirsty.

The plant or the flowers should not be taken because it grows in the park and in the mysterious world of the spirit kingdom. In the past, someone who wanted this flower must be brave enough to fight and gamble his soul. That is why the flower is called Sandar Nyawa. The flower has never wilted and is as old as the mysterious spirits.

The Peak of Rinjani

The people of Lombok believe that the peak of Mt. Rinjani is where Dewi Anjani, the queen spirit and ruler of Mt. Rinjani lives. To the south-east from the peak in a sea of dust called Segara Muncar is the invisible palace of the queen Dewi Anjani and her followers. They are good spirits. According to a story about the Queen Spirit Dewi Anjani she was the daugther of a King who would not allow her to marry her boyfriend. At a spring called Mandala she dissappeared and changed from the real world to the spirit world.

This site uses Akismet to reduce spam. Learn how your comment data is processed.