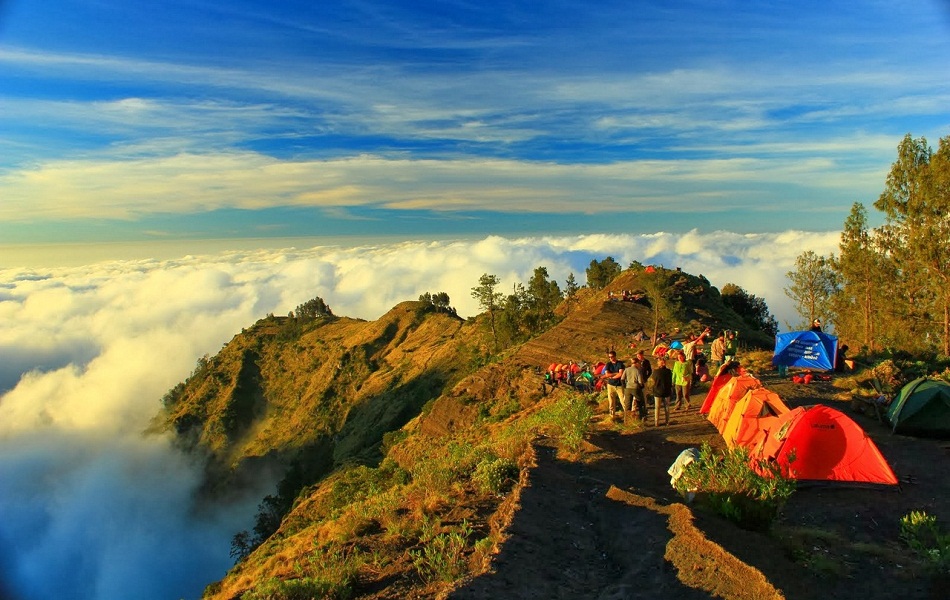 This route appeals to those short of time, climbing to Mt. Rinjani Crater Rim in Gunung Rinjani National Park. Starting and ending in Senaru or Sembalun Lawang, it provides spectacular views of the Lake Segara Anak within the volcano crater. This gentle trek is good for beginners, or family with children (minimum 10 years old). Tour can leave any days except weather condition does not permitted. Highlights are: Spectacular Sunset and Sunrise at the Crater Rim

First Day
Pick up early at your hotel on Sengigi / Bangsal, transfer to Senaru / Sembalun Lawang, then Register at the Rinjani Trek Centre (RTC) in Senaru (601m)  / Sembalun (1.156m) early in the morning, meet your guide arrange National Park entry ticket. The first hours of the trek climb steeply through thick tropical forest rich in flora, bird life and variety of butterflies. You might see orchid and if lucky, the rare black ebony leaf monkey, known locally as lutung. Rest stops are taken along the way, and at pos 2 Montong Satas shelter ( 1,500m ). Village stories and local legends are related by your guide.

Depending on your preperance and weather conditions, the night camp is made either in the forest at pos 3 Mondokan Lolak (2,000m) after about five hours climb from senaru, or continue the ascent for another couple of hours through grassy meadows Plawangan 1 Senaru crater rim at 2,641m. from the crater rim are sweeping views across the lake Segara Anak (2,00m) to the summit of Mt. Rinjani. Within the crater, Mt. Baru ( 2,351m) is an active, last erupting dramatically in 1994. On a clear evening the Gili Island, Bali and Mt. Agung can be seen to the west.

Second Day
Sunrise at the crater rim is a memorable to Day 2, enjoyed after a pre-dawn two hour climb for those camping at pos 3 Mondokon Lolak. After enjoying the view, descend down the trail down to senaru village through first grassland then back into the shade of the tropical forest. After about seven hours from the rim, the trek ends at Rinjani Trek Centre at the road head in Senaru.